I have to confess, I'm in love with Survivor. It's probably the best reality TV show ever. A lot of my friends aren't into it, and think about it probably how I used to think about it: stupid, boring, totally predictable. Except it's not. It's so awesome that I want to read internet message boards about it. And I do. It's the reason I got bunny ears, when I ditched my cable, and outside of Law and Order the odd time, pretty much the only television I watch. 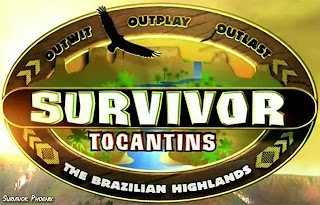 This season is no exception. We have possibly a Survivor first - an alliance formed on Exile Island that might prove to be the thing that gets the winner to the end. It's all very exciting. Yes, I know how ridiculous that sounds, but really. I'm not going to lie. I love watching a bunch of really strange and interesting personality types all try to live together and work together and strategize together in extremely stressful and constantly demanding surroundings. I believe that it ultimately says a lot about who's really a good person and who's not, and whether or not that matters really, enough to determine whether you get the $1 Million at the end of it. My current theory is that you do have to be a good person to succeed at the game and get the prize. Jury votes, alliances, probably all depend on a certain level of respect and admiration from your peers. Usually you have to be a good person to earn that. Usually.

Plus Jeff Probst being a total snark and not holding anything back. Plus the editing! Ohh, the editing.

I like watching along and deciding who I believe is worthy enough to win... and then seeing if actually happens. I love watching people realize a lot of really profound stuff about themselves and how they interact in this world. Or watching them not realize it and keep on being totally clueless and full of themselves - there's one of those this season, too. (Yeah, I'm talking about you, Coach!) All in all, amazing television. Skeptics, give it another watch. You'll be glad you did.
Posted by 80milliontimes at 10:37 PM