It rained the day of the protest. Which sucked. But still, two hundred people showed up. We stood under umbrellas in the rain, listening to speakers, holding signs, chanting "Tim Trow Must Go!" It was very peaceful. We collected tons of blankets, towels, toys, food, kitten formula, and other donations for the animals inside the shelter. 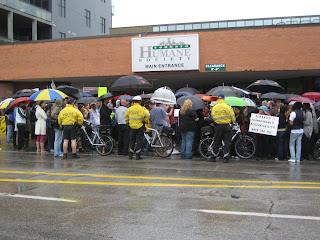 Ran into a friend that used to work at the Toronto Humane Society and wow, was it ever a reunion of ex-shelter workers and volunteers. When the chanting began, one of the ex-employees said to him "I'm scared to say anything. I don't want to get sued." She hadn't worked there in years but had signed something on her departure and wasn't sure when it "expired" and she was legally able to participate in something like this. She said there were current shelter workers there who were basically incognito. Hoodies up, sunglasses on, wanting to support the protesters, wanting to rally for change, but scared out of their mind for their jobs.

All this just reaffirmed that there is something definitely wrong at the Toronto Humane Society. A lot wrong.

Some good reading on the subject: