Michael Vick is a Jerkface Loserhead 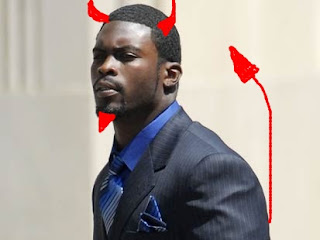 This guy is a class A douchebag. NFL Atlanta Falcons quarterback Michael Vick will officially pled guilty to federal dogfighting charges next Monday, which could land him in jail for up to six years and cost him hundreds of thousands of dollars. Woo! I've been following this case since it broke, even going as far as subscribing to Google Alerts. I love Google Alerts.

All this badness began in April of this year, when investigators conducting a drug search at a Newport News property owned by Vick found 66 dogs, including 55 pit bulls, and equipment typically used in dog fighting. They included a "rape stand" that holds aggressive dogs in place for mating and a "breakstick" used to pry open a dog's mouth. He's accused of bankrolling and participating in the dogfighting operation... you can read the entire 18 page indictment here -- sick, sick stuff. Dogfights organized by Bad Newz Kennels had purses of thousands of dollars, as if this loser needs any more money. But you know, it's not the money, it's the thrill. Of watching dogs fight gruesomely to the death. Uh, yeah.
Vick originally pled not guilty and was awaiting trial in November - meanwhile, he was asked not to show up to Falcons training camp, and sponsors like Nike and Reebok are pulling their business. Animal rights people, and hell, pet owners everywhere are all over this - letter writing, petition signing, protesting. Business has to respond. If I was a mom, I sure as hell wouldn't want my kids wearing Michael Vick jerseys.

Then there was the whole debate about whether the media has the right to crucify him and shouldn't he be afforded due process, and can't the world just leave him alone? Poor, poor Michael Vick. Cause, you know, it was Vick's cousin was living at that house, not him. Michael Vick had noooo idea this dogfighting enterprise was going on on his property. And then, slowly but surely all three of his co-defendents flip. They plead guilty and agreed to cooperate with the feds. After the first defendent flipped, Vick was still maintaining his innocence. His PR guys have one hell of a job trying to repair his public image. They issued some ridiculous statement that basically said 'Michael Vick loves dogs. He would never hurt them.' And then, the other two flipped. And what could he really do then? Swallow his pride and plead out for a lesser sentence. Douchebag.
And of course, many of his supporters are pulling the race card. That's right -- the media and the public are crucifying poor Vick because he's a successful black man worth $100 million. And apparently white people can't stand that, so we're on a crusade to destroy him. Uh-huh.
Nevermind that this guy doesn't exactly have a wonderful track record. In 2005, he slept with a Georgia woman who contracted Herpes as a result - Mr. Vick didn't have the decency to disclose to the woman he was positive for the virus before they slept together. She sued; he settled. And last November he even flipped off a stadium full of fans after losing a frustrating game. Now that's a role model.

Is this case such a big issue because Michael Vick is a black man? I say no. Is he getting so much attention because he's a celebrity athlete who participated in and bankrolled a horrifying crime? Sure. That's the price you pay for being in the public eye, Vick. Wouldn't matter if you were Native, Caucasian, Japanese or East Indian.
The only good that has come out of this is increased public awareness of the underground dogfighting world, and of animal cruelty in general, and the fact that this guy is going to do time. Once he officially enters his plea, it will likely take another couple of months before his sentence is actually decided - and I hope they're tough on him.
Posted by 80milliontimes at 11:47 AM

Oh wait, it's okay, 'cause now he has found Jesus.