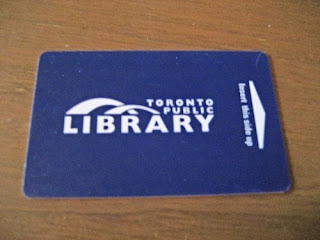 Recently I've rediscovered the library. I'm not used to having time to read for pleasure: I spent most of last year pretty much reading textbooks and lab manuals exclusively...There was no time for biographies and novels. This summer, I've been loving reading, though. The Toronto library system is decent - I can order up whatever I want on the internet, wait for it to come in, and pick it up at my local branch when it's ready. I'm catching up, slowly.
Currently I'm waiting for some great stuff:
"The Compassionate Carnivore: Or, How to Keep Animals Happy, Save Old MacDonald's Farm, Reduce Your Hoofprint, and Still Eat Meat" by Catherine Friend. No, I'm not thinking about going back to meat. But I am curious to read this, because I have loads of meat eating friends that do care about the earth and animals, and I suspect this might be a good book to recommend to people who want to make good choices but aren't ready or willing to part with meat in their diet.
"Five Years of My Life: An Innocent Man in Guantanamo" by Murat Kurnaz. Over a year ago, I saw Murat being interviewed on 60 Minutes. His story is compelling. At age 19, on a visit to Pakistan, he was taken into custody, sold to US forces, and held without proper charge in Guantanamo where he endured nearly five years of torture and suffering. After some massive campaigning by friends, family, and thousands of Amnesty International supporters, Murat was finally released and wrote this book.
"Summer of My Amazing Luck" by Miriam Toews. I just finished a book by her, called "A Complicated Kindness" that I just loved. I'm hooked on her writing, her characters, everything. If this novel is even close to as good as that one, I'm in for a treat.
"Merle's Door: Lessons from a Freethinking Dog" by Ted Kerasote. I gave this book to Ola for her 30th birthday and have been wanting to read it ever since. Somewhere, though I can't remember where, it was described as the best story about a dog there ever was. That's enough for me. I'm sure I'll cry buckets of tears when the dog eventually dies at the end, but that's to be expected, and I'm a sucker for dog stories.
"Redemption: The Myth of Pet Overpopulation and the No Kill Revolution in America" by Nathan Winograd. The story of animal sheltering in the United States, a history of sorts. I've been reading the author's blog a lot lately and like his take on animal issues.
"The Unwritten Rules of Social Relationships: Decoding Social Mysteries Through the Unique Perspective of Autism" by Temple Grandin & Sean Barron. Temple Grandin rules. She's autistic, a Ph.D. in Animal Science, and just plain brilliant. I *loved* her book, Animals In Translation - she's just got such a different way of looking at the world - her perspective about whatever she's tackling seems totally different, but the thing is, it always makes sense - it's just not the way I naturally, initially think about things. Which I find fascinating. A new world. Really exciting. I have only ever read her stuff about animals before - am really looking forward to her take on human social relationships.
I've also ordered up a DVD about Dr. Grandin called "The Woman Who Thinks Like A Cow" , which is about her life in general, and her work improving conditions in the livestock industry. I recently cancelled my cable, so am always looking for free, interesting, educational, stuff to watch. I miss the National Geographic Channel, and The Documentary Channel. (Okay, and HBO.)
Ohhh, just making this list is making me super anxious to sink my teeth into all this good stuff. Hooray for the library - I'll never stay away this long again!
Posted by 80milliontimes at 6:46 PM