My cat Senor Snuggles has this hilarious personality. He loooves him some attention, but it's gotta be on his terms. Or he might get a little frisky with his claws. He wants the love, but he selects the time. I am at his beck and call.

We're giving him a dental cleaning at school in a week or so, so he's having to do some travelling. He hates travelling. We went to the vet this week so he could be brought up to date on vaccines. The vet that is a five minute walk from my doorstep. He manages to take his characteristic I'm-in-my-carrier-fuck-you shit in that five minutes. When we brought him out to the exam table, he actually peed on the table. Yeah. I was mortified. Poor Snuggles. He's coming to school with me on Wednesday for his work up - blood collection, x-rays, etc. I'm kind of terrified for him, and for me.

He acts like he doesn't care that he lives here, that he loves me and Siris. And then whenever I pull him out of that environment, he can't handle it. But he's gonna have some nice clean teeth as a result, and I'll save money on potential extractions and complications later. So it's for his own good. And he's always super sucky when I get him back home. 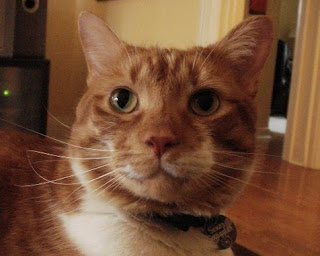 (photo is courtesy of my dogwalker, Kim.)