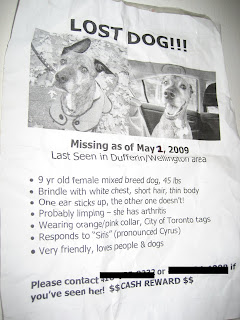 While I was moving, Siroons went to stay with a friend. I couldn't deal with her constantly being in the way, anxiety increasing by the minute, following me around like a shadow. I made the move okay, and was supposed to rendez vous with my friend that night for her 30th birthday party and then get a lift home with Siris in the morning. A chance to relax, have a few beers, see my puppers again... but nope. Miss Siris decided to bolt from their place and went MIA.
I spent the whole weekend driving around, dropping off posters, making calls, logging her as Lost on every internet site I could imagine, hiking fields trying to find my girl. Worrying my head off, trying not to worry my head off. Rollercoaster city. My friend feeling awful, her birthday ruined, and me still wound up from the move.
She took off on Saturday morning and we found her Sunday morning at Kennel Inn (animal control) in Aurora. Turns out she hadn't gone far at all, and an off duty kennel worker picked her up shortly after she left. I was beside myself when we got the call that they had her. They let me come in to make sure it was her, even though they were technically closed. Oh, happy tears! And then I had to leave her there and pick her up the next day since they'd be open. It was brutal leaving her there, but amaaaazing to know she was safe. Never thought I'd be one of those douchebags picking up their lost dog at animal control, but so be it.
Within two minutes of putting her back in the car, I was already shouting commands at her, as she was a brat in the back seat, squirmy and hyperactive. Heh. We had a doggie date at the Aurora Dog Park, a hike through some trails, a long ride back and she was out for hours. A nice calm intro to my new place.
Here she is crashed out after I got her home: 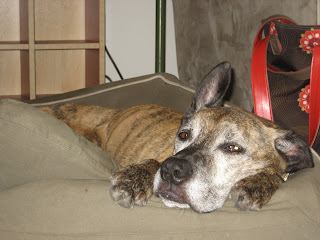 and chilling on the patio the next day: 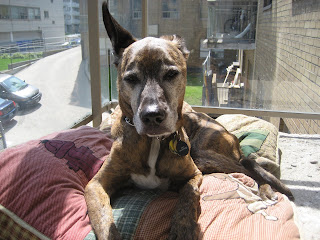